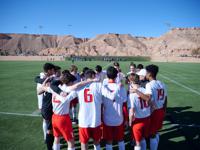 The 7 Elite Academy International Tournament has been hailed as a “massive success” after thousands of young soccer players converged on the competition in Utah and Nevada.

The prestigious three-day event attracted 138 teams from across the world - ranging from Pre-Academy to Under-18 age groups - to venues in Saint George and Mesquite.

A diverse pool of winners saw the 7 Elite Academy United Kingdom team take victory in the Under-15 Boys bracket, while local side Utah Storm were crowned Under-11 Girls champions.

Overall, there were 16 separate age groups for male and female players.

A program of activities saw DJs provide entertainment throughout the tournament, alongside numerous food and merchandise stands.

Anthony Godfrey, 7 Elite Academy Global Technical Director, said: “This entire event, from start to finish, has been a fantastic illustration of how young people can come together and enjoy this great sport of ours.

“Every single player who took to the fields in Saint George and Mesquite showed great commitment to their team and overall skill. I can't praise them enough.

“I need to thank not only the players, but also the parents, families and team staff for making this tournament a massive success.

“I want to also say a huge well done to our 7 Elite Academy UK players, who spent months fundraising for the trip and then performed brilliantly to win their age group.

“The memories from this competition will stay with us all for a lifetime.”

7 Elite Academy coaches thousands of young footballers across the world, including in the US, UK and Africa.

The attendance of players from Liverpool, UK, was part of an expansion strategy that will see even more international teams attend next year's event.

Daren Woolstenhume, CEO of 7 Elite Academy, said: “I am absolutely delighted that so many players have had such a great time at this year's tournament. The feedback I have received has been overwhelmingly positive.

“The fact that a record number of teams attended shows how highly 7 Elite Academy is regarded, not only within the Utah soccer community, but also across the world.

“Next year, we want to bring over 170 teams to our venues and even more players from the UK, Europe and Africa will be attending,

“A tournament this size, spread over two sites, is of course a logistical challenge but our staff worked brilliantly as a team throughout. It has been ten months in the planning and that certainly showed.”

For a full round-up of results from the 2020 7 Elite Academy International Tournament, go to https://www.7eliteacademy.com/internationaltournament.